Bristol at the UNISON women’s conference

Earlier this month, four women from the University of Bristol branch travelled to Liverpool to attend UNISON’s annual women’s conference. 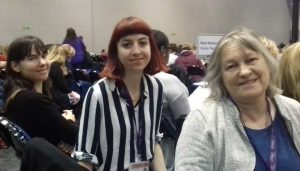 We heard motions being debated on a wide range of issues, including improving representation for young women members and Black women members. There were also motions on period poverty, violence against women, and non-binary inclusion in UNISON. You can download a full conference guide including a list of motions from the UNISON 2018 women’s conference web page.

For those considering attending Women’s Conference, from a first-timer this year:

“I would say it’s definitely worth going, you get to meet lots of interesting people and learn more about the Union. If you are quite new to UNISON it also puts you more at ease with its structures, and I think it helped boost my confidence in terms of thinking about getting involved in the future.”