UNISON members, alongside Unite and students, have been out demonstrating with our UCU colleagues during the strike against proposed pension scheme changes. The UNISON branch has passed a motion in support at our AGM (full details below).

To find out more about the issues and the strike action, look at UCU’s ‘Strike for USS’ page. 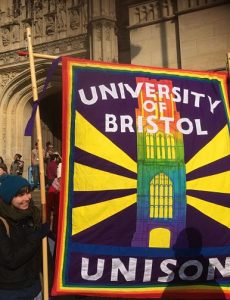 The new University of Bristol UNISON banner has its first outing at the rally in support of the strike action.

Full text of the motion passed at the University of Bristol UNISON AGM.

1) That the strike called by UCU is in response to a massive attack on university staff pensions. The proposals from Universities UK will mean huge cuts to pensions – a new lecturer, for example, could lose some £208,000 of retirement income.

2) That the employers want individual pension pots which are gambled on the stock market and where risk is borne by individual members of staff and not institutions.

3) That attacks on pensions are intimately linked to the further marketisation of higher education more generally.

4) That as well as privatisation, the attack on pensions is about preparing universities for full entry into a higher education market where the richest institutions are not required to carry liabilities on behalf of the poorest and most vulnerable.

5) That the attacks on pensions come as part of a process of casualisation of university staff and a period of pay offers that amount to pay cuts.

6) That this comes at a time when Universities are hoarding massive surpluses thanks to the £9k tuition fees – universities made a £1.8bn surplus – and when Vice Chancellors and senior management staff have seen dramatic increases in their already exorbitant pay.

8] That a YouGov poll conducted on the eve of the strikes showed 61% of students across all universities support the strikes.

1) To publish a public message of support to lecturers and other UCU-affiliated staff in at University of Bristol UCU branch.

2) To hold a voluntary collection for the UCU strike hardship fund.

3) To continue to send a delegation with banner to visit the UCU picket lines and contact all members inviting them to visit and offer support to striking colleagues.